Mercy is an excellent choice for players who are new to the support role in Overwatch. Almost every hero can be seen as a Mercy Counter, since she does not have the means to protect herself aside from flying away. Since her general strategy is staying behind a tank and Healing damage, it’s worth noting that her gun (caduceus blaster) deals a lot of damage if you are able to land the shots. Thier are a couple of characters in particular that are more effective as Mercy Counters then others. Tracer due to her ability to flank and Retreat without dying is one of the best Mercy Counters.

Mercy is a strong single target healer that can fit with almost any Overwatch team. The most over-powered feature Mercy has is the ability to resurrect her team-mates. She is Excellent when combined with allies who have no way of self-healing, or allies that deal a lot of long-ranged damage like Pharah or Junkrat.

Mercy is always the first target the enemy team will see due to the power of Resurrect. Your Teammates should always be ready to peel for you and protect you as mercy if needed. You should aswell keep a look out of your surroundings constantly and watch to see if the enemy team starts bringing out heroes like Widowmaker or Genji to try and kill you. 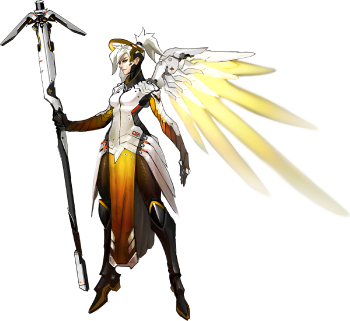